Beautiful, magnificent and sexy are just a few of the words that describe the multi-talented Brandy Moss-Scott. She combines these assets with her ability to write, arrange, produce and play keyboards on her second album entitled "Fresh," which features her recent hit, "I Don't Really Know," which last year became the first independent label single by a solo artist in the 10 year history of Billboard's Hot R&B/Hip-Hop Sales chart to enter in the #1 position, and Brandy's record label, Heavenly Tunes, became only the second independent label to accomplish such a feat. The record then remained on the chart for seven months. In 2003, the single was also nominated for a Billboard R&B/Hip-Hop Award. Also included in the album is her latest release, a Top 10 chart hit, "Starting With Me," which Brandy has dedicated to the late Roger Troutman, the former leader of the family electro-funk group Zapp.

"Fresh" is the follow up album to the Chicago native's first release "Girlfriend," which included her hit "Bye-Bye Baby," which remained a Top 10 hit for 28 consecutive weeks, as well as her hit duet with Coolio, "Tears of a Clown." Both "Bye-Bye Baby" and "I Don't Really Know" were among the 50 biggest selling R&B hits of 2002 according to Billboard Magazine's year-end charts.

Ms. Moss-Scott has now expanded her vistas into the world of television. She has become the CEO of Phat West, Inc., which, in conjunction with Knightscope Entertainment, Inc., will produce a regional version of "Phat Phat 'N All That," a one-hour talk/variety show which will feature celebrity interviews, videos, "live" performances by new artists, "man on the street" interviews and contests for viewers.

Although she has begun to reap the benefits of her journey, the road has been anything but a straight path for Brandy Moss-Scott. Born on August 4th, while still an infant, her parents divorced. Her mother worked as a seamstress to support Brandy and her siblings. Her mother also made sure that the church was a significant part of Brandy's life. It was there at the First Gideon Baptist Church that Brandy gave her first vocal performance with the children's choir. By the time she was in the 7th grade, she had formed a singing group with some of her friends. The feisty and vivacious lady sang and did choreography for the group, resulting in them winning first place in various local talent contests.

During her youth, Brandy regularly attended shows at the Regal Theatre and became fascinated with the prospect of becoming an entertainer. The charming and energetic young lady was soon "adopted" by many top entertainers, including Chaka Khan, Mavis and Pop Staples, Gene "The Duke Of Earl" Chandler, Ron Isley and Minnie Riperton, to mention just a few.

Following high school her "voyage" took a serious change in direction when she attended medical school at St. Luke's Presbyterian Hospital. She wound up in the OBGYN area where she was involved in the delivery of over 3,000 children, but a transfer to the Pediatrics Department helped make the decision to reroute her trip back to the world of music.

Her charm and talent inspired industry legends such as Milton Berle, Ella Fitzgerald, Little Richard and James Brown to offer her personal advice and direction as she continued to pursue her career. She began to "hit the road." Her first extensive tour took her out with Dennis Edwards, the former lead singer of The Temptations, for ten months as both a lead and background vocalist. She also toured with Chaka Khan, Bobby Womack, The Gap Band, The Temptations, and a host of others. Along the way, she also recorded with many of the previously named artists. At this point, Brandy began to expand her vistas by starting to write material that she hoped to record as a solo artist. But, a serious detour delayed the journey … the murder of her father. Needing a change of scenery, Brandy moved to Cabo San Lucas in Mexico.

In 1992, she founded a musical production company, Spotlight Entertainment. The company provided musical production services for a variety of successful events including a massive charity benefit and live concert in conjunction with the Red Cross at the Los Angeles Mission. The company also helped launch the Redondo Beach Performing Arts Center in California by presenting Chaka Khan in concert. She also arranged a number of contemporary music shows at the Cabo Wabo Cantina in Mexico. The club is owned by rock stars Van Halen and Sammy Hagar.

Four years ago, with a personal assist from "Godfather" James Brown, Brandy landed her first solo recording deal with Private Eye Records. Unfortunately, label head Joe Isgro was sent to jail and the album was never released. Brandy found herself having to virtually restart from scratch but, soon thereafter, independent label Heavenly Tunes came on the scene, leading to the eventual release of "Girlfriend" and now "Fresh."

Ms. Moss-Scott has also begun to "give back" by founding the Sherwood Forest Foundation to build housing for the homeless. The Foundation has already obtained land in Alabama as the first step towards constructing the initial facilities.

Despite the travails, for Brandy Moss-Scott her spirituality and faith in herself have made the road thus far seem like just the beginning. She has a lot more terrain to cover and it is doubtful that anyone who crosses her path would think that she will be deterred from reaching the end of the road. 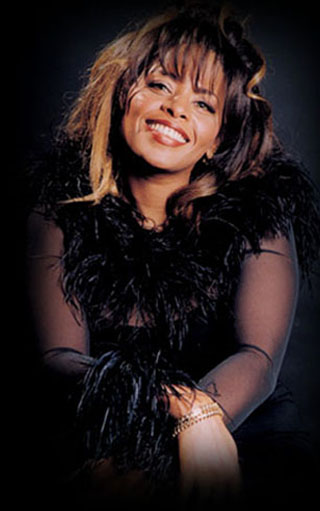